For other uses, see Kalyug (disambiguation).
Not to be confused with goddess Kali.

The Kali Yuga, in Hinduism, is the fourth and worst of the four yugas (world ages) in a Yuga Cycle, preceded by Dvapara Yuga and followed by the next cycle's Krita (Satya) Yuga. It is believed to be the present age, which is full of conflict and sin.[1][2][3]

The "Kali" of Kali Yuga means "strife", "discord", "quarrel" or "contention" and Kali Yuga is associated with the demon Kali (not to be confused with the goddess Kālī).[citation needed]

According to P. V. Kane, one of the earliest inscriptions with one of the four yugas named is the Pikira grant of Pallava Simhavarman (mid-5th century CE):[13][14]

Who was ever ready to extricate dharma that had become sunk owing to the evil effects of Kaliyuga.

Other epigraphs exist with named yugas in the Old Mysore region of India, published in Epigraphia Carnatica.[15] 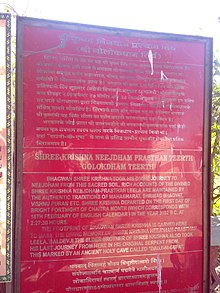 Information kiosk at Bhalka, the place from where Krishna returned to his heavenly abode

According to the Surya Siddhanta, Kali Yuga began at midnight (00:00) on 18 February 3102 BCE.[7][8][16] This is also considered the date on which Krishna left the earth to return to Vaikuntha.[17] This information is placed at the temple of Bhalka, the place of this incident (see photo).

According to K. D. Abhyankar, the starting point of Kali Yuga is an extremely rare planetary alignment, which is depicted in the Mohenjo-daro seals.[19] Going by this alignment, the year 3102 BCE is slightly off. The actual date for this alignment is 7 February 3104 BCE. There is also sufficient proof to believe that Vrdhha Garga knew of precessions at least by 500 BCE. Garga had calculated the rate of precession to within 30% of what the modern scholars estimate.[20][21][better source needed]

Hindu texts describe four yugas (world ages)⁠ in a Yuga Cycle, where, starting in order from the first age of Krita (Satya) Yuga, each yuga's length decreases by one-fourth (25%), giving proportions of 4:3:2:1. Each yuga is described as having a main period (a.k.a. yuga proper) preceded by its yuga-sandhyā (dawn) and followed by its yuga-sandhyāṃśa (dusk)⁠, where each twilight (dawn/dusk) lasts for one-tenth (10%) of its main period. Lengths are given in divine years (years of the gods), each lasting for 360 solar (human) years.[22][23][24]

(17) A year (of men) is equal to a day and night of the gods ... (19) I shall, in their order, tell you the number of years that are for different purposes calculated differently, in the Krita, the Treta, the Dwapara, and the Kali yugas. (20) Four thousand celestial years is the duration of the first or Krita age. The morning of that cycle consists of four hundred years and its evening is of four hundred years. (21) Regarding the other cycles, the duration of each gradually decreases by a quarter in respect of both the principal period with the minor portion and the conjoining portion itself.

(67) A year is a day and a night of the gods ... (68) But hear now the brief (description of) the duration of a night and a day of Brahman and of the several ages (of the world, yuga) according to their order. (69) They declare that the Krita age (consists of) four thousand years (of the gods); the twilight preceding it consists of as many hundreds, and the twilight following it of the same number. (70) In the other three ages with their twilights preceding and following, the thousands and hundreds are diminished by one (in each).

(13) ... twelve months make a year. This is called a day of the gods. (14) ... Six times sixty [360] of them are a year of the gods ... (15) Twelve thousand of these divine years are denominated a Quadruple Age (caturyuga); of ten thousand times four hundred and thirty-two [4,320,000] solar years (16) Is composed that Quadruple Age, with its dawn and twilight. The difference of the Golden and the other Ages, as measured by the difference in the number of the feet of Virtue in each, is as follows : (17) The tenth part of an Age, multiplied successively by four, three, two, and one, gives the length of the Golden and the other Ages, in order : the sixth part of each belongs to its dawn and twilight.

Hinduism often symbolically represents morality (dharma) as an Indian bull. In Satya Yuga, the first stage of development, the bull has four legs, which is reduced by one in each age that follows. By the age of Kali, morality is reduced to only a quarter of that of the golden age, so that the bull of Dharma has only one leg.[29][30] 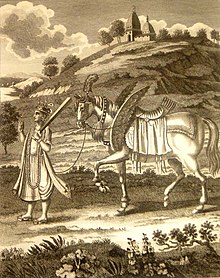 Kalki and his horse, Devadatta.

The demon Kali (not to be confused with the goddess Kālī) is the reigning lord of Kali Yuga and his nemesis is Kalki, the tenth and final Avatar of Vishnu.[citation needed]

References in the Mahabharata

The Kurukshetra War and the decimation of Kauravas thus happened at the Yuga-Sandhi, the point of transition from one yuga to another.[31] The scriptures mention Narada as having momentarily intercepted the demon Kali on his way to the Earth when Duryodhana was about to be born in order to make him an embodiment of arishadvargas and adharma in preparation of the era of decay in values and the consequent havoc.[citation needed]

A discourse by Markandeya in the Mahabharata identifies some of the attributes of Kali Yuga.[32]

In relation to rulers, it lists:

With regard to human relationships, Markandeya's discourse says:

The Brahma Vaivarta Purana (related to Rathantara kalpa) mentions a ten thousand-year period, starting from the traditional dating of the Kali Yuga epoch, during which bhakti yogis will be present.[33] Krishna foretold that Kali Yuga will be full of extreme hardships for people with ideals and values.

The Brahma-vaivarta Purana has words spoken by Krishna to Mother Ganga just before the beginning of the Kali Yuga (the age of quarrel and strife). The Kali Yuga began approximately five thousand years ago; that golden age is being described below by Krishna. Predicted in Brahma-vaivarta Purana 4.129, the fourth part of the Brahma-vaivarta is called Kṛṣṇa-janma-khanda. Chapter 129 is called Golokarohanam, because it describes how Krishna returns to His abode. This specific dialogue is between Krishna and Mother Ganga. Verse 49 is a question by Ganga, verses 50–60 are Krishna's answer.

This text is taken from the Brahma-vaivarta Purana [14] Text 59:

For 10,000 years of Kali such devotees of Mine will be present on earth. After the departure of My devotees there will be only one varna.

(Sri Krisna said:) Lord Hari will stay on this earth for the first ten-thousand years of Kali-yuga. Till then gods will be worshipped and the Puranas and scriptures will also be present.

Now, the Dark Age of Kali Yuga has come. Plant the Naam, the Name of the One Lord. It is not the season to plant other seeds. Do not wander lost in doubt and delusion.

The Kali Yuga is an important concept in both Theosophy and Anthroposophy,[35][36] and in the writings of Helena Blavatsky, W.Q. Judge, Rudolf Steiner, and Traditionalist philosophers such as René Guénon and Julius Evola, among others. Rudolf Steiner believed that the Kali Yuga ended in 1900.[35]

The dictionary definition of Kali Yuga at Wiktionary