A motto (derived from the Latin muttum, 'mutter', by way of Italian motto, 'word', 'sentence')[1][2][3] is the general motivation or intention of an individual, family, social group or organization.[2][3] Mottos are usually found predominantly in written form (unlike slogans, which may also be expressed orally), and may stem from long traditions of social foundations, or from significant events, such as a civil war or a revolution. A motto may be in any language, but Latin has been widely used, especially in the Western world.

Arms of Brady Brim-DeForest, Baron of Balvaird, with the motto above the crest as is traditional in Scottish heraldry. 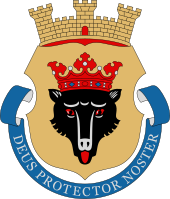 Below the arms of Pori is the motto Deus protector noster (Latin for 'God is our protector').[4]

In heraldry, a motto is often found below the shield in a banderole; this placement stems from the Middle Ages, in which the vast majority of nobles possessed a coat of arms and a motto. In the case of Scottish heraldry it is mandated to appear above the crest.[5] Spanish coats of arms may display a motto in the bordure of the shield.[6] In heraldic literature, the terms "rallying cry" respectively "battle banner" are also common, which date back to the battle cry, and is usually located above the coat of arms.

In English heraldry mottos are not granted with armorial bearings, and may be adopted and changed at will. In Scottish heraldry, mottos can only be changed by re-matriculation, with the Lord Lyon King of Arms.[7] Although unusual in England and perhaps outside English heraldic practice, there are some examples, such as in Belgium, of the particular appearance of the motto scroll and letters thereon being blazoned;[8] a prominent example is the obverse of the Great Seal of the United States (which is a coat of arms and follows heraldic conventions), the blazon for which specifies that the motto scroll is held in the beak of the bald eagle serving as the escutcheon's supporter.

Ships and submarines in the Royal Navy each have a badge and motto, as do units of the Royal Air Force.[9]

Latin has been very common for mottos, but for nation states their official language is generally chosen. Examples of unusual choices in motto language include:

A canting motto is one that contains word play.[14] For example, the motto of the Earl of Onslow is Festina lente (literally "make haste slowly"), punningly interpreting on-slow.[15] Similarly, the motto of the Burgh of Tayport, Te oportet alte ferri ("It is incumbent on you to carry yourself high"), is a cant on "Tayport at auld Tay Ferry", also alluding to the local lighthouse.[16] The motto of the U.S. Federal Bureau of Investigation, Fidelity, Bravery, Integrity, is a backronym of the letters F.B.I.

In literature, a motto is a sentence, phrase, poem, or word prefixed to an essay, chapter, novel, or the like suggestive of its subject matter. It is a short, suggestive expression of a guiding principle for the written material that follows.[3]

For example, Robert Louis Stevenson's Travels with a Donkey in the Cévennes uses mottos at the start of each section.[17]