The New York Athletic Club is a private social club and athletic club in New York. Founded in 1868, [1] the club has approximately 8,600 members and two facilities: the City House, located at 180 Central Park South in Manhattan; and Travers Island in Westchester County. Membership in the club is by invitation only.[2]

Named for Wall Street businessman William R. Travers who arranged for its purchase in 1886, Travers Island is the NYAC's summer facility on Long Island Sound. It consists of the main house, other buildings and facilities that sit on 30 acres (120,000 m2) of landscaped grounds. Centered around the Main House, the Olympic-sized salt water pool, and accompanying cabanas, Travers Island extends the range of NYAC sports to include tennis, rowing, yachting, outdoor swimming and diving, a children's day camp, rugby, soccer, croquet, and lacrosse.[3] 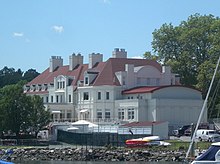 In 1866, William Buckingham Curtis, Harry Buermeyer, and John C. Babcock opened a gymnasium on the corner of 6th Avenue and 14th Street in their New York City apartment, after discussing the rapid rise of organized athletics in England.[4] Interest in their gym grew, and the three men decided to found the New York Athletic Club on September 8, 1868.[5] The club was modeled after the London Athletic Club.[6] Their goal was to sponsor athletic competitions in the New York area, and to keep official records for different sports. The NYAC was established on September 8, 1868. Its Constitution and Bylaws were adopted in December 1868.[5] In the beginning there was no initiation fee, but $10 was required for the first six months of dues.[7]

In 1879, at which time it had 170 members, it published rules in various amateur sports, including fencing, sparring, and Greco-Roman wrestling.[5] The NYAC can be considered the foundation for amateur athletics in the United States. It was the first organization to compile and apply a code of rules for the government of athletic meetings, the first to offer prizes for open amateur games, and the first to hold an amateur championship.[9] 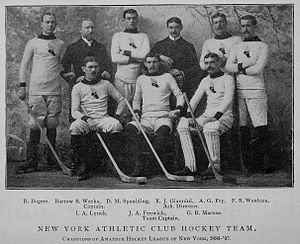 The NYAC's Mercury Cup series is the premier regional fencing event in North America. The series includes a number of épée and sabre tournaments, ending each season with the "Epeepalooza" and "Sabrage" events. Competitors earn points based on final placements at each tournament, with the champion being the highest-ranked fencer at the conclusion of the season.

In November 2003, the club was the site of a four-game chess match between Garry Kasparov and the computer program X3D Fritz. In June 2004, the club played host to the final play-offs of the United States National Snooker Championship, and in May 2017 it played host to the entire event.[12]

The NYAC currently fields 22 different teams for the following sports:[13]

The New York Athletic Club was, for most of its history, a men’s club with the purpose to "promote manly sports." New York City passed a law in 1984 requiring "the admission of women to large, private clubs that play an important role in business and professional life."[15] The NYAC, with 10,000 members, was one of four clubs that the city sanctioned for disobeying the law. The NYAC challenged the law, arguing it was a violation of the First Amendment to the U.S. Constitution guaranteeing the right to freedom of association. The case made its way to the United States Supreme Court where in June 1988, the court held that the clubs who had brought the suit were too dissimilar for the court to decide the case and remanded the case back to the federal district court. This has sometimes been incorrectly reported as upholding the ban.[16] Facing the high cost of restarting the case on its own, the NYAC changed its by-laws and voluntarily admitted some female members in 1989.[17][18][19]

There were also claims, over the years, that the club discriminated against blacks and Jews. In 1936, Olympian Marty Glickman was turned away in the NYAC lobby by the NYAC's Athletic Director when he sought to join his fellow runner in working out at the club. Glickman believed this was because he was Jewish.[20][21][22] In the mid-1950s, New York City Councilman Earl D. Brown, a Manhattan Democrat, refused to attend an outing at an NYAC facility to protest the fact that the club: "discriminates against Negroes and Jews on its track team". The Race Relations Reporter reported that a spokesman for the NYAC, Alfred Foster, "admitted that the club has no Jewish or Negro athletes on its teams". However, it also reported that the club secretary stated there were some Jewish members of the NYAC.[23][24][25]

In February 1962, New York City Mayor Robert F. Wagner, Jr. quit the NYAC due to allegations that it barred blacks and Jews.[26] Woody Allen had a joke about a Jewish couple that was dressed as a moose and was shot and stuffed and mounted at the NYAC, with his punch line being "And the joke is on them, because it is restricted."[27][28][29]

In May 1964, the club was picketed by demonstrators from the Congress for Racial Equality who shouted slogans calling for integration of Negroes and Jews.[30] In the late 1960s, members of The Olympic Project for Human Rights organized black athletes to boycott events held at the NYAC on the grounds that the club excluded Blacks and Jews from membership.[31] Olympian Byron Dyce and most black athletes boycotted the NYAC Games at Madison Square Garden in February 1968 to protest what it alleged were the club's discriminatory membership policies.[32][33] A 500-600-person crowd protested outside the Games, with picketers charging at police, who swung their nightsticks at the picketers in reaction, with each at times knocking the others to the ground.[34][35] At the same time, fifty alumni of the University of Notre Dame encouraged their fellow alumni to resign from the club unless it explained its exclusion of non-Whites and Jews.[31][36] In June 1970, columnist Nat Hentoff criticized Ted Sorensen, who was running in the primary election for the Democratic nomination for U.S. Senator from New York, because Sorensen had lived for a time at the NYAC, writing: "what kind of man would choose to live in one of this city's redoubts of bigotry?"[37]

In March 1981, prior to a press conference at the NYAC, Muhammad Ali picked up the microphone to test it out and said: "Ladies and Gentlemen, the Jews and niggers and all the other members of the NAACP welcome you to the NYAC."[38][39] In 1989, Olympic gold medal winner Antonio McKay became the first Black track and field athlete to compete for the NYAC.[40]