In law, a non liquet (commonly known as "lacuna in the law") is any situation where there is no applicable law. Non liquet translates into English from Latin as "it is not clear".[1] According to Cicero, the term was applied during the Roman Republic to a verdict of "not proven" where the guilt or innocence of the accused was "not clear".[2] Strictly, a finding of non liquet could result in a decision that the matter will always remain non-justiciable, whereas a lacuna denotes within that concept a lacking hence that the matter should in future be governed by law. 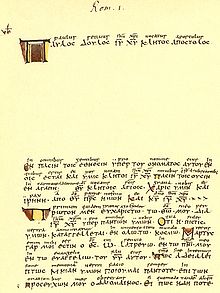 First page of the Codex Boernerianus with a visible lacuna in the non-metaphorical (so non-legal) sense in Romans 1:1-4

Loopholes are a subset of lacunae.

A lacuna describes every specific matter about which no law exists, but a body of public, judicial or academic opinion believes it should, to address a particular issue (often described as "unregulated" or "wholly inadequately regulated" activities or areas). A loophole, where properly defined by contrast, denotes that a set of laws addressing a certain issue exists, but can be circumvented (or is being exploited) due to a technical defect in that law.

Related legal interpretative rules include the:

In short, the wording will be interpreted if dictionaries and grammar allow so as to plug the gaps in the law as the state instrument (or ruling) intended.

Relationship to the development of Common Law

All cases which establish a new rule or exception fill lacunae in the existing law.

If in a higher court in the jurisdiction, each of these are decisions thereafter considered to be a binding precedent; in England and Wales if in the various divisions of the High Court or below then these are of persuasive precedent value.[3] 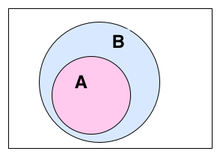 Every legal duty (shown as subset A). Every moral obligation (shown as B)
See also: R v Instan

Moral principles and norms are broader than the intended reach of any system of laws (jurisdiction) which permits human autonomy and diversity of thinking or action.

If this one-to-one relationship is accepted, this defines a definitive master set from which the subset, true legal lacunae (as opposed to semantic omissions) are all contained.

A non liquet applies to facts with no answer from the governing system of law. It is prominent in international law as global forums such as the International Court of Justice and United Nations ad hoc tribunals are reluctant to invent or heavily mould law to redress a moral-legal lacuna. One last resort in substantively deciding disputes is to seek the system to embrace accepted (lowest common denominator) procedural or non-controversial law of civilized nations. An instance is the Case Concerning Barcelona Traction, Light, and Power Company, Ltd which took the doctrine of estoppel into international law. Such out of constrained confines (ex aequo et bono) jurisdiction has been heavily limited or ruled out by most treaty contracting parties as to their substantive obligations. Rather than use the term non-justiciable, the forum may flag up that it would like the clarity to decide on such matters in future by stating it is non liquet. Luhmann criticises such indecision as opposed to the paradigm of law being a complete (and autonomous) system.[5] English jurisprudence holds that municipal courts enforcing international law are not constrained to declare an area non liquet.[6]