This article is about the king of the Lombards. For the genus of land snails, see Rhachis. For the biological term, see Rachis. For the Romanian village of Rachiş, see Mirăslău. 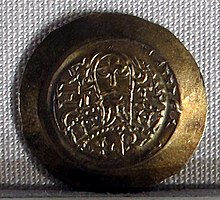 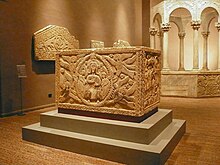 Altar of Ratchis in Cividale, dedicated to the memory of his father Pemmo

His father was Duke Pemmo, and he was the nephew of Lombard king Liutprand, who appointed him as duke of Friuli in 737 despite former strife with Pemmo. Rachis was married to a Roman woman named Tassia. During his rule of Friuli, he launched an expedition against the Slavs in Carniola, across the Eastern Alps, fighting personally during the battles.

He became king of (northern) Italy in 744, after the deposition of Hildeprand, most likely with the support of the most autonomous among the Lombard dukes. Ratchis ruled initially in peace, in particular with the nearby Byzantine-ruled Exarchate of Ravenna. However, perhaps pushed by more traditional parties among his followers, in 749 he invaded the Pentapolis and besieged Perugia. Pope Zachary convinced him to lift the siege, but this further reduced his authority among the dukes, who deposed him in the same year during an assembly held in Milan. His brother Aistulf became the new king. Ratchis initially tried to oppose the decision, but soon was forced to flee to Rome; he later entered the abbey of Montecassino with his family.

After the death of Aistulf in 756, he tried once again to reign over the Lombards. He was able to gain control of the royal palace in Pavia with the support of several Lombard nobles of northern Italy. However, he was defeated by the Duke of Tuscany, Desiderius, supported, among others, by Pope Stephen II and the Frankish king Pepin the Short. In 757 Ratchis retired again to a monastery, either Montecassino or Cervaro.[1]