The Satya Yuga (a.k.a. Krita Yuga), in Hinduism, is the first and best of the four yugas (world ages) in a Yuga Cycle, preceded by Kali Yuga of the previous cycle and followed by Treta Yuga.[1][2] 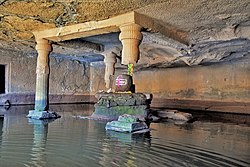 Kedareshwar Cave Temple is located at Harishchandragad, a hill fort in Ahmednagar district. Though there were four pillars surrounding the Linga, now there is only one pillar intact. Some believe the pillars to be symbols of yuga or time, namely, Satya, Treta, Dvapara and the Kali Yuga

Satya Yuga is known as the age of truth, when humanity is governed by gods, and every manifestation or work is close to the purest ideal and humanity will allow intrinsic goodness to rule supreme. It is sometimes referred to as the "Golden Age". The Satya Yuga lasts for 1,728,000 years or 4,800 divine years. The god Dharma (depicted in the form of a bull), which symbolizes morality, stood on all four legs during this period. The legs of Dharma reduce by one in each yuga that follows.[citation needed]

Krita Yuga (Sanskrit: कृतयुग, romanized: kṛtayuga, kritayuga, kṛta-yuga, or krita-yuga), a synonym for Satya Yuga, means "the accomplished or completed age" or "the age of righteous or action", a time when people perform pious (righteous) actions, and is sometimes referred to as the "Golden Age".[5]

Hindu texts describe four yugas (world ages)⁠ in a Yuga Cycle, where, starting in order from the first age of Krita (Satya) Yuga, each yuga's length decreases by one-fourth (25%), giving proportions of 4:3:2:1. Each yuga is described as having a main period (a.k.a. yuga proper) preceded by its yuga-sandhyā (dawn) and followed by its yuga-sandhyāṃśa (dusk)⁠, where each twilight (dawn/dusk) lasts for one-tenth (10%) of its main period. Lengths are given in divine years (years of the gods), each lasting for 360 solar (human) years.[7][8][9]

(17) A year (of men) is equal to a day and night of the gods ... (19) I shall, in their order, tell you the number of years that are for different purposes calculated differently, in the Krita, the Treta, the Dwapara, and the Kali yugas. (20) Four thousand celestial years is the duration of the first or Krita age. The morning of that cycle consists of four hundred years and its evening is of four hundred years. (21) Regarding the other cycles, the duration of each gradually decreases by a quarter in respect of both the principal period with the minor portion and the conjoining portion itself.

(67) A year is a day and a night of the gods ... (68) But hear now the brief (description of) the duration of a night and a day of Brahman and of the several ages (of the world, yuga) according to their order. (69) They declare that the Krita age (consists of) four thousand years (of the gods); the twilight preceding it consists of as many hundreds, and the twilight following it of the same number. (70) In the other three ages with their twilights preceding and following, the thousands and hundreds are diminished by one (in each).

(13) ... twelve months make a year. This is called a day of the gods. (14) ... Six times sixty [360] of them are a year of the gods ... (15) Twelve thousand of these divine years are denominated a Quadruple Age (caturyuga); of ten thousand times four hundred and thirty-two [4,320,000] solar years (16) Is composed that Quadruple Age, with its dawn and twilight. The difference of the Golden and the other Ages, as measured by the difference in the number of the feet of Virtue in each, is as follows : (17) The tenth part of an Age, multiplied successively by four, three, two, and one, gives the length of the Golden and the other Ages, in order : the sixth part of each belongs to its dawn and twilight.

there were no poor and no rich; there was no need to labor, because all that men required was obtained by the power of will; the chief virtue was the abandonment of all worldly desires. The Krita Yuga was without disease; there was no lessening with the years; there was no hatred or vanity, or evil thought; no sorrow, no fear. All mankind could attain to supreme blessedness.

Among the four eras, the Satya Yuga is the first and the most significant one. Knowledge, meditation, and penance hold special importance in this era.[15] All the pillars of dharma are present in totality. During Satya Yuga, all people engage only in good, sublime deeds. Ashrams become devoid of wickedness and deceit. Natyam (classical dance), according to Natya Shastra, did not exist in the Satya Yuga "because it was the time when all people were happy". Lord Vishnu incarnated in four forms i.e. Matsya, Kurma, Varaha and Narsimha in this era. The only text which was considered credible and was followed was Manu’s Dharma Shastra. The average human lifespan in Satya Yuga began with 100,000 years and gradually decreased to 10,000 years.[citation needed]

One shall witness the total establishment of Sanatan Dharma (eternal religion). All the deities, demons, Gandharvas, and Yaksha would give up their hatred and differences. The Rigveda, Samaveda and Yajurveda were not separate and demarcated. This era was devoid of agricultural activities or any other type of activity. Just by mere contemplation one would beget desired results. People in this era would never fall ill. No one would try to point out faults or demerits in anyone’s personality. The personality was not plagued by demerits like ego, sorrow, violent thought (aggression), jealousy, hatred, backbiting, fear, anger and lethargy.[citation needed]

At that time, the color of the Supreme cosmic soul that was situated in the heart of one and all and the savior of all the sages was white (light).[citation needed]

All the people that are Brahmins, Kshatriyas, Vaishyas and Shudras were embellished with all the good qualities. People would practice austerities and penance to attain Brahman. All would be inclined towards the supreme knowledge and all actions performed would be in the intention of attaining celestial bliss.[citation needed]

In this way all these divine people would be bestowed with sublime faith and piousness. Albeit, people were segregated on the basis of the varnashram method, they would all response their faith in the Vedas and the Sanatan Dharma because these people were devoid of selfishness, and they would effortlessly attain sublimity or union with God, which is a salient feature of Satya Yuga. Very valiant, mighty, intelligent and people gifted with all good qualities would be born in this era. They would surprisingly give birth to thousands of children. Great sages embellished with divinity would be born in this era.[citation needed]