For the wine, see Saumur (wine). For the Canadian Supreme Court decision, see Saumur v. The City of Quebec.

listen)) is a commune in the Maine-et-Loire department in western France.

The historic town is located between the Loire and Thouet rivers, and is surrounded by the vineyards of Saumur itself, Chinon, Bourgueil, Coteaux du Layon, etc. which produce some of France's finest wines.

Early settlement of the region goes back many thousands of years. The Dolmen de Bagneux on the south of the town, is 23 meters long and is built from 15 large slabs of the local stone, weighing over 500 tons. It is the largest in France.

The Château de Saumur was constructed in the 10th century to protect the Loire river crossing from Norman attacks after the settlement of Saumur was sacked in 845. The castle, destroyed in 1067 and inherited by the House of Plantagenet, was rebuilt by Henry II of England in the later 12th century. It changed hands several times between Anjou and France until 1589.

Houses in Saumur are constructed almost exclusively of the Tuffeau stone. The caves dug to excavate the stone have become tunnels and have been used by the local vineyards as locations to store their wines.[2]

Amyraldism, or the School of Saumur, is the name used to denote a distinctive form of Reformed theology taught by Moses Amyraut at the University of Saumur in the 17th century. Saumur is also the scene for Balzac's novel Eugénie Grandet, written by the French author in 1833.

Prior to the French Revolution Saumur was the capital of the Sénéchaussée de Saumur [fr], a bailiwick, which existed until 1793. Saumur was then the location of the Battle of Saumur during the Revolt in the Vendée, becoming a state prison under Napoleon Bonaparte. The town was an equestrian centre with both the military cavalry school from 1783 and later the Cadre Noir based there. 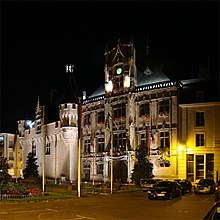 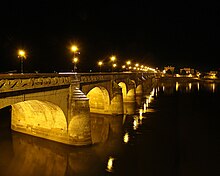 During the Battle of France, in World War II, Saumur was the site of the Battle of Saumur (1940) where the town and south bank of the Loire was defended by the teenage cadets of the cavalry school, to their great credit and for the Honour of France.[3]

In 1944 it was the target of the first Tallboy and the fourth Azon bombing raids by Allied planes. The first ever Tallboy raid, on 8/9 June 1944,[4] was against a railway tunnel near Saumur, seeing the first use of the 12,000 lb (5,400 kg) Tallboy "earthquake" bombs. The hastily organized night raid was to stop a planned German Panzer Division, travelling to engage the newly landed allied forces in Normandy. The panzers were expected to use the railway to cross the Loire. No. 83 Squadron RAF illuminated the area with flares from four Avro Lancasters and marked the target at low level by three de Havilland Mosquitos. 25 Lancasters of No. 617 Squadron RAF, the "Dambusters" then dropped their Tallboys from 18,000 ft (5,500 m) with great accuracy. They hit the approaches to the bridge, blocked the railway cutting and one pierced the roof of the tunnel, bringing down a huge quantity of rock and soil which blocked the tunnel, badly delaying the German reinforcements moving towards Normandy, especially 2nd SS Panzer Division Das Reich.[5][6] The damaged tunnel was quickly dug out to make a deeper cutting, resulting in the need for a second attack.

On 22 June, nine Consolidated B-24 Liberators of the United States Army Air Forces used the new Azon 1,000 lb (450 kg) glide bombs against the Saumur rail bridge;[7] escorted by 43 North American P-51 Mustangs. They failed to destroy the bridge. During the morning of 24 June, 38 American Boeing B-17 Flying Fortresses with conventional bombs attacked the bridge; escort was provided by 121 of 135 P-51s.[7] The bridge was damaged.

The town of Saumur was awarded the Croix de Guerre with palm for its resistance and display of French patriotism during the war.

Saumur is home to the Cadre Noir,[8] the École Nationale d'Équitation (National School of Horsemanship), known for its annual horse shows, as well as the Armoured Branch and Cavalry Training School, the officer school for armored forces (tanks).

There is the national tank museum, the Musée des Blindés, with more than 850 armored vehicles, wheeled or tracked. Most of them are from France, though some come from other countries such as Brazil, Germany, and the Soviet Union, as well as axis and allied vehicles of World War Two.

The annual military Carrousel takes place in July each year, as it has done for over 160 years, with displays of horse cavalry skills, historic and modern military vehicles.[9]

Amongst the most important monuments of Saumur are the great Château de Saumur itself which stands high above the town, and the nearby Château de Beaulieu which stands just 200 metres from the south bank of the Loire river and which was designed by the architect Jean Drapeau. A giant sequoia tree (which is protected) stands in the grounds of Château de Beaulieu. The Dolmen de Bagneux is on the old road going south.

The architectural character of the town owes much to the fact that it is constructed almost exclusively of Tuffeau stone.[10]

The wine industry surrounds Saumur, many utilising the tunnels as cellars with the hundreds of domaines producing white, red, rosé and sparkling wines. Visits to producers and the annual Grandes Tablées du Saumur-Champigny is an annual event held in early August with over 1 km of tables set up in Saumur so people can sample the local foods and wine.[11]

Saumur has a weekly market every Saturday morning with hundreds of stalls open for business in the streets and squares of the old town, from before 8am.

Cessart bridge over the Loire river in Saumur

Saumur was the birthplace of:

Saumur is twinned with:[12]

In 1973 Saumur absorbed four neighbouring communes.[13] The population data for 1968 and earlier in the table and graph below refer to the pre-1973 borders.