TDI, an abbreviation for "Turbocharged Direct Injection", is a marketing term used by Volkswagen Group for its turbocharged diesel engines that have direct fuel injection.[1][2] 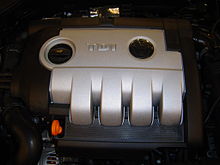 The first TDI engine, a straight-five engine, was produced for the 1989 Audi 100 TDI sedan. In 1999, common rail fuel injection was introduced, in the V8 engine used by the Audi A8 3.3 TDI Quattro. From 2006 until 2014, Audi successfully competed in the LMP1 category of motor racing using TDI engine-powered racing cars.

TDI engines installed in 2009 to 2015 model year Volkswagen Group cars sold through 18 September 2015 had an emissions defeat device,[8][9] which activated emissions controls only during emissions testing. The emissions controls were suppressed otherwise, allowing the TDI engines to exceed legal limits on emissions.[10] VW has admitted to using the illegal device in its TDI diesel cars.[11]

TDI is the combination of two existing diesel engine technologies:

Similar technology has been used by other automotive companies, but the "TDI" marketing term is only used by Volkswagen Group and Land Rover. Volkswagen Group uses the term SDI (which stands for "Suction Diesel Injection") for its naturally aspirated (i.e. non-turbocharged) direct-injection diesel engines. 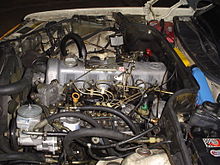 Three years after the Fiat Croma, Volkswagen Group's first TDI engine was introduced in the 1989 Audi 100 TDI sedan.[15][16] The Audi 100 was powered by the Volkswagen 2.5 R5 TDI straight-five engine which used an electronic distributor injection pump (called "VerteilerPumpe" by Volkswagen) and two-stage direct injection. The initial version of this engine generated 88 kW (118 hp) at 3,250 rpm and 275 N⋅m (203 lb⋅ft) at 2,500 rpm.

Since 2009, most of the Volkswagen Group TDI engines have switched from unit injectors to common rail injection.

On 18 September 2015 the US EPA and California Air Resources Board served notice to VW that approximately 480,000 VW and Audi automobiles equipped with 2.0 TDI engines sold in the US between 2009 and 2015 had an emissions compliance defeat device installed.[8][9] The defeat device, in the form of specially crafted engine management unit firmware, detects emissions testing conditions, and in such conditions will cause the vehicle to comply with emissions regulations by properly activating all emissions controls. However, under normal driving conditions, the emissions controls are suppressed, allowing the engine to produce more torque and get better fuel economy, at the expense of emitting up to 40 times more nitrogen oxides than allowed by law.[10] Such NOx emission levels are not in compliance with US regulations. VW has since admitted to these allegations, and said that the illegal software was in use in its diesel cars worldwide, affecting some 11 million vehicles.[11]