For other uses, see Volterra (disambiguation).

Volterra (Italian pronunciation: [volˈtɛrra]; Latin: Volaterrae) is a walled mountaintop town in the Tuscany region of Italy. Its history dates from before the 8th century BC and it has substantial structures from the Etruscan, Roman, and Medieval periods.[4] 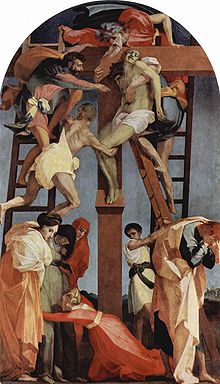 Frescoes in the Church of San Francesco

Volterra, known to the ancient Etruscans as Velathri or Vlathri[5] and to the Romans as Volaterrae,[6] is a town and comune in the Tuscany region of Italy. The town was a Bronze Age settlement of the Proto-Villanovan culture,[7][8] and an important Etruscan center (Velàthre, Velathri or Felathri in Etruscan, Volaterrae in Latin language), one of the "twelve cities" of the Etruscan League.[9][10]

The site is believed to have been continuously inhabited as a city since at least the end of the 8th century BC.[11][12][13] It became a municipium allied to Rome at the end of the 3rd century BC.[14][15] The city was a bishop's residence in the 5th century,[16] and its episcopal power was affirmed during the 12th century. With the decline of the episcopate and the discovery of local alum deposits, Volterra became a place of interest of the Republic of Florence, whose forces conquered Volterra.[17] Florentine rule was not always popular, and opposition occasionally broke into rebellion.[18] These rebellions were put down by Florence.

When the Republic of Florence fell in 1530, Volterra came under the control of the Medici family and later followed the history of the Grand Duchy of Tuscany.

Volterra has a station on the Cecina-Volterra Railway, called "Volterra Saline – Pomarance" due to its position, in the frazione of Saline di Volterra.[19][20] 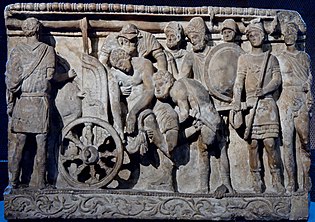 Menelaus and Meriones lifting Patroclus' corpse on a cart while Odysseus looks on; alabaster urn, Etruscan artwork from Volterra, 2nd century BC

From lordly Volaterrae,
Where scowls the far-famed hold
Piled by the hands of giants
For Godlike Kings of old.

Volterra is twinned with: