For the Taiwanese actor, see Sunny Wang.
In this Chinese name, the family name is Wang.

Wang Shouren (26 October 1472 – 9 January 1529), courtesy name Bo'an, was a Chinese calligrapher, military general, philosopher, politician, and writer during the Ming dynasty. After Zhu Xi, he is commonly regarded as the most important Neo-Confucian thinker, with interpretations of Confucianism that denied the rationalist dualism of the orthodox philosophy of Zhu Xi. Wang was known as Yangming Xiansheng and/or Yangming Zi in literary circles; both mean "Master Yangming".

In China, Japan, and Western countries, he is known by his honorific name rather than his private name.[1]

He was born Wang Shouren (王守仁) in Yuyao, Zhejiang Province, to a scholarly family with a tradition of bureaucratic service. His father, Wang Hua, was first (Zhuangyuan, 狀元) in the Imperial Examination of 1481, and rose to become the vice-minister of the Ministry of Rites, but was later demoted and subsequently expelled from government service due to having offended Liu Jin, a eunuch.

Wang earned the juren degree in 1492 and the jinshi degree in 1499. He later served as an executive assistant in various government departments until banishment for offending a eunuch in 1506.[2] However, his professional career resumed when he became the Governor of Jiangxi.[3]

Wang became a successful general and was known for the strict discipline he imposed on his troops. In 1517 and 1518, he was dispatched in response to petitions to suppress peasant revolts in Jiangxi, Fujian and Guangdong. Concerned with the destruction that came with war, he petitioned the court to allow amnesty, and successfully destroyed rebel military forces.

Suppressing the Prince of Ning 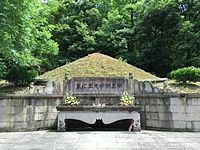 Tomb of Wang Yangming at Shaoxing

In 1519 AD, while he was governor of Jiangxi province and on his way to suppress the revolts in Fujian, Wang was suddenly faced with the Prince of Ning rebellion, led by Zhu Chenhao the fourth Prince of Ning. Given that the prince's base in Nanchang allowed him to sail down the Yangtze River and capture the southern capital of Nanjing, Wang actively prepared for battle to prevent that possibility, while engaging in deception to convince the prince that armies were moving to surround him. The prince, deceived by this, hesitated and gave time for Nanjing to be reinforced. Eventually, forced to engage governmental forces, the Prince of Ning was defeated and captured.

In this campaign, Wang also made one of the earliest references to using the fo-lang-ji in battle, a breech loading culverin cannon imported from the newly arrived Portuguese venturers to China.[3] As governor of Jiangxi he also built schools, rehabilitated the rebels, and reconstructed what was lost by the enemy during the revolt. Though he was made an earl, he was ostracized for opposing Zhu Xi.[2]

Thirty-eight years after his death, he was given the titles Marquis and Completion of Culture. In 1584 he was offered sacrifice in the Confucian Temple, the highest honour for a scholar.[2]

Wang was the leading figure in the Neo-Confucian School of heart, founded by 陸九淵 Lu Jiuyuan (or Lu Xiangshan) of Southern Song. This school championed an interpretation of Mencius, a Classical Confucian who became the focus of later interpretation, that unified knowledge with action. Their rival school, the School of Principle (Li) treated gaining knowledge as a kind of preparation or cultivation that, when completed, could guide action.

Out of Cheng-Zhu's Neo-Confucianism that was mainstream at the time, Wang Yangming developed the idea of innate knowing, arguing that every person knows from birth the difference between good and evil. Wang claimed that such knowledge is intuitive and not rational. These revolutionizing ideas of Wang Yangming would later inspire prominent Japanese thinkers like Motoori Norinaga, who argued that because of the Shinto deities, Japanese people alone had the intuitive ability to distinguish good and evil without complex rationalization. His school of thought (Ōyōmei-gaku in Japanese, Ō stands for the surname "Wang", yōmei stands for "Yangming", gaku stands for "school of learning") also greatly influenced the Japanese samurai ethic.

Integration of Knowledge and Action

Wang's rejection of the pure investigation of knowledge comes from the then traditional view of Chinese belief that once one gained knowledge, one had a duty to put that knowledge into action. This presupposed two possibilities: That one can have knowledge without/prior to corresponding action. or that That one can know what is the proper action, but still fail to act.

Wang rejected both of these which allowed him to develop his philosophy of action. Wang believed that only through simultaneous action could one gain knowledge and denied all other ways of gaining it. To him, there was no way to use knowledge after gaining it because he believed that knowledge and action were unified as one. Any knowledge that had been gained then put into action was considered delusion or false.

Mind and the world

He held that objects do not exist entirely apart from the mind because the mind shapes them. He believed that it is not the world that shapes the mind, but the mind that gives reason to the world. Therefore, the mind alone is the source of all reason. He understood this to be an inner light, an innate moral goodness and understanding of what is good.

In order to eliminate selfish desires that cloud the mind's understanding of goodness, one can practice his type of meditation often called "tranquil repose" or "sitting still" ( 靜坐 jingzuo). This is similar to the practice of Chan (Zen) meditation in Buddhism.

Wang Yangming is regarded one of the greatest masters of Confucianism in history along with Confucius, Mencius and Zhu Xi (孔孟朱王). He founded "Yaojiang School" (姚江學派) or "Yangming School of Mind" (陽明心學), which became one of the dominant Confucian schools in the mid-late Ming period and Qing period China. The typical figures came from this school after Wang were Wang Ji (王龍溪), Qian Dehong (錢德洪), Wang Gen, Huang Zongxi, Li Zhuowu and Liu Zongzhou (劉宗周). Wang Gen formed Taizhou School (泰州學派), which went left of Wang Yangming's thought. During the late Ming period, Wang Yangming's thought became notably popular and influential in China. Wang's interpretation of Confucianism has been influential in China into modern times. The twentieth-century Chinese warlord Yan Xishan attempted to revive Confucianism in Shanxi largely on the model of Wang's philosophy.[4] The teachings of Wang Yangming were credited with inspiring many Japanese reformers and revolutionaries during the nineteenth century. This led to a great increase in interest in his thought in Japan at the end of the Meiji period, when many Chinese activists such as Liang Qichao and Chiang Kai-shek were staying in Japan. Some Chinese and Korean thinkers believed that Wang Yangming's teachings strongly influenced the development of modern bushido (the "way of the warrior") in Japan, and promoted both ethics in their countries to strengthen the spirit of their respective peoples.[5]

The Japanese Admiral of the Russo-Japanese War, Tōgō Heihachirō, was influenced by Wang, and made a stamp which read, "One's whole life followed the example of Yangming" (Japanese: 一生低首拜陽明). In Japan, many scholars and politicians (this group of people is known in Japanese as "Yōmeigakusha" (Japanese: 陽明学者) came from Wang Yangming's school (Ōyōmei-gaku) in history, including Kumazawa Banzan, Saigō Takamori, Takasugi Shinsaku and Nakae Tōju. Toju Nakae is regarded as the founder of Japanese Ōyōmei-gaku.

Chiang Kai-shek named a national attraction in Taiwan, Yangmingshan, after Wang; and a road in Nanchang is also named Yangming Road after Wang by Chiang-influenced local officials. Additionally, National Yang-Ming University in Taiwan is also named after the philosopher. People in Guiyang, provincial capital of Guizhou Province, dedicated a statue to Wang Yangming as well as a museum and theme park; a robot version of Wang Yangming is in the city.[6] The city government in Wang's hometown, Yuyao, Zhejiang Province, named a middle school after his honorific name.