The 72.68-square-kilometre (28.06 sq mi) municipality is the 338th largest by area out of the 356 municipalities in Norway. Haugesund is the 28th most populous municipality in Norway with a population of 37,357. The municipality's population density is 546.4 inhabitants per square kilometre (1,415/sq mi) and its population has increased by 9.7% over the previous 10-year period.[4][5]

The town is situated on a strategically important sound, the Karmsundet, through which ships could pass without traversing heavy seas. In the early years, the coastal waters off Haugesund were a huge source of herring, and the town grew accordingly. Despite being barely a village back then, King Harald Fairhair lived at Avaldsnes, very close to the modern town of Haugesund. In the last decades, the town, like its neighbours, has been turning towards the petroleum industry, with the herring being long gone.

During the last 20 years, the municipality has established its position as the main trading centre for the Haugaland region and southern parts of Vestland county. It has several relatively large shopping centres, however, this has led to a decline of the trade and shopping activity in the town centre.[7]

The Haugesund Region, a statistical metropolitan area, which consists of the municipalities Karmøy, Haugesund, Tysvær, Sveio and Bokn, has a population of approximately 100,000 people (as of 2009). 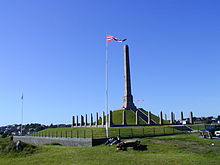 Despite being a fairly young town, the areas surrounding Haugesund were lands of power during the Viking Age. Harald Fairhair was the first king of Norway. He had his home in Avaldsnes, also known as Homeland of the Viking Kings, only 8 km (4.9 mi) from the present town.[8][9] After his death in c. 940, Fairhair was buried at Haraldshaugen, a burial mound adjacent to the Karmsundet strait.[10] This site is the namesake of the town and municipality of Haugesund. The national monument at Haraldshaugen was raised in 1872, to commemorate the 1000th anniversary of the Battle of Hafrsfjord in 872. The Battle of Hafrsfjord has traditionally been regarded as when western Norway was unified under a single monarch for the first time.[11]

Haugesund has a strong historical bond to the sea and especially the herring. In the earlier years, the coastal waters of Haugesund were a huge source for fishing herring, and the town grew accordingly. The protective straits of Smedasund and Karmsund gave the town potential to grow in both fishing and shipping. Even to this day, Karmsund is one of Norway's busiest waterways. The town is still growing geographically even though the population has increased only moderately the last decade. Today the herring is long gone, and the town is turning more and more towards the petroleum industry, like its neighbouring town to the south, Stavanger.

The town is named after the Haugesundet strait. The first element (Hauge) goes back to the genitive plural of the Old Norse word haugr meaning hill or mound. The last element is sund meaning strait or sound.[3]

The coat of arms for Haugesund was granted on 5 March 1930. They were designed by Hallvard Trætteberg. The arms are blue with three silver/white seagulls lined up vertically. The seagulls and blue color were chosen to represent the importance of the sea. These arms replaced the old coat of arms that were granted on 29 December 1862. The old arms showed three herring barrels, an anchor, and three seagulls. The old arms showed the importance of herring fishing and processing in the town. The three barrels also represented the three parts of the municipality: the mainland and the islands of Hasseløy and Risøy. The new arms from 1930 removed the herring barrels due to the decline in the importance of that industry.[13]

Haugesund municipality has a coastline with the North Sea, however, the island of Karmøy and the archipelago of Røvær shelter it from the rough waters of the ocean. The Karmsundet strait, located between Karmøy and Haugesund used to be very strategically important, since ships could pass without having to sail through heavy sea. Haugesund's city centre has a distinctive street layout, similar to those found in Kristiansand and Oslo. Haugesund has a typical maritime climate with mild winters, cool but pleasant springs, and mild summers lasting until the end of September. Monthly 24-hr average range from 1.1 °C (34.0 °F) in February to 14 °C (57 °F) in August. Mean annual precipitation is 1,520 millimetres (60 in), with September to December as the wettest period.[14]

The municipality includes several islands. Risøy and Hasseløy are densely built, and connected to the mainland by bridges. Røvær which lies further out and consists of a number of islands, is also populated and connected to the mainland by ferry. Vibrandsøy and its neighboring islands are now mainly a recreational area. Røværsholmen Lighthouse sits just off the coast of the main Røvær island. The lakes Vigdarvatnet and Stakkastadvatnet are located in the municipality.

Haugesund City Hall was built in 1931, celebrating its 75th anniversary in 2006.[15] The pink city hall, designed by Gudolf Blakstad and Herman Munthe-Kaas,[16] is one of the finest neo-classical buildings in Norway, and has been elected the most beautiful building in Haugesund.[17] It is also included in the new Norwegian edition of the game Monopoly after it was successful in a national vote. The building may not be altered in any way without permission from the national preservation agency. It overlooks the town square and a park which was inaugurated on 28 August 1949.[17]

During the last 20 years, the municipality has established its position as the main trading centre for the Haugaland region and southern parts of Vestland county. It has several relatively large shopping centres, however, this has led to a decline of the trade and shopping activity in the town centre.[7]

There are several churches in the town of Haugesund including Vår Frelsers Church, Udland Church, Rossabø Church, and Skåre Church.

All municipalities in Norway, including Haugesund, are responsible for primary education (through 10th grade), outpatient health services, senior citizen services, unemployment and other social services, zoning, economic development, and municipal roads. The municipality is governed by a municipal council of elected representatives, which in turn elect a mayor.[18] The municipality falls under the Haugaland District Court and the Gulating Court of Appeal.

The municipal council (Kommunestyre) of Haugesund is made up of 49 representatives that are elected every four years. The government is located at the Haugesund City Hall. The party breakdown is as follows: 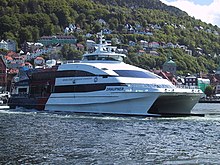 MS Draupner, one of the catamaran ferries on the former route Bergen – Haugesund – Stavanger

Haugesund Airport, located on the island of Karmøy to the southwest of Haugesund in Karmøy municipality, has year-round flights to Oslo and Gdańsk in addition to some seasonal and charter destinations.[38] The Norwegian airline Coast Air was based at Haugesund airport, but filed for bankruptcy on 23 January 2008.[39]

The bus station in Haugesund is located at Flotmyr on the east side of the downtown area. Long-distance bus services are available to Stavanger, Bergen, and Oslo. The local bus transport is operated by Vy Buss, on a contract with Kolumbus.

The town is connected to the island of Utsira by car ferry, and to the islands of Røvær and Feøy by passenger ferry. Until 2008, the Newcastle–Bergen–Stavanger ferry operated here as well.

Haugesund Hospital provides specialist health services to around 180,000 inhabitants in North Rogaland, Sunnhordland, Hardanger and Ryfylke. The hospital offers services in both medicine and surgery, radiology / X-ray, childbirth / maternity, gynecology and fertility, habilitation and specialized treatment in mental health care.[40] There are also more than 10 public and private health centers in the municipality for either general or specialized care, including the Privatsykehuset Haugesund.

In the summer of 2004, the annual rock festival, ""RockFest"" started. It attracted local, national and international pop and rock bands, such as Elton John, Madcon, DumDum Boys and Kaizers Orchestra. The festival started as a part of the celebration of Haugesund's 150 year anniversary. In 2009, the last Rockfest was held, and got replaced by a new concept in 2010; Haugesund Live. Haugesund Live is a series of individual concerts, and has featured bands such as The Baseballs, Kim Larsen and Mötley Crüe.

Haugesunds Avis is a daily newspaper published in Haugesund, but with branches in Bømlo, Kopervik, Odda, Sauda and Stord. Founded in 1895, it is today owned by the investment group Mecom Group, and is as such part of the media group Edda Media. In 2006, Haugesunds Avis had a circulation of 33 448.[43] As of 2007, the executive editor is Tonny Nundal. The newspaper owns the local radio channel Radio 102.

The Church of Norway has three parishes (sokn) within the municipality of Haugesund. It is part of the Haugaland prosti (deanery) in the Diocese of Stavanger.

The county of Rogaland operates four high schools in Haugesund. The schools Skeisvang and Vardafjell prepare pupils for further for college or university studies. The schools Haugaland and Karmsund are vocational high schools. In addition, the private Haugesund Toppidrettsgymnas has a sports-oriented high school program.

The municipality has seven pure elementary schools of grades 1 to 7 (Saltveit, Gard, Austrheim, Solvang, Lillesund, Rossabø, and Brakahaug), two pure middle schools of grades 8 to 10 (Haraldsvang and Håvåsen) and three grade 1 to 10 schools (Hauge, Røvær, and Skåredalen). In addition, the Breidablik school offers elementary and middle school courses to new foreigners and refugees. The two private schools are Steinerskolen offering a Waldorf education program, and Danielsen, a Christian school offering courses for grades 8 and 9.[45]

The strongest local football team is FK Haugesund that has stayed in the Norwegian Premier League since 2010. The team plays its home matches at Haugesund Stadion.

Haugesund has sister city agreements with the following places:

Each of the sister cities (with exception of Emden) has given its name to a street in Haugesund. The streets are located in the same area near the border to the neighbouring municipality.[47]